AHA: Cardiac Arrest Survivor Reunites With Bystanders Who Saved Him 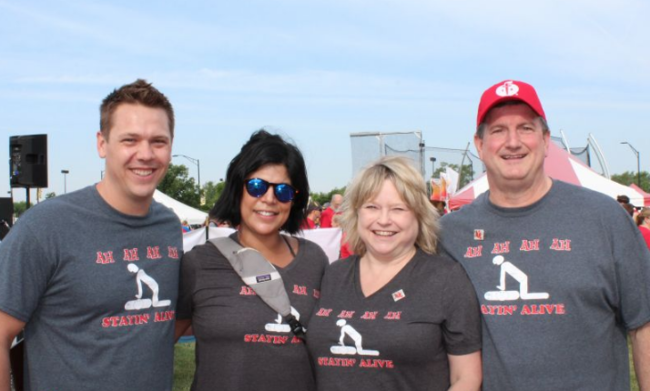 TUESDAY, Jan. 8, 2019 (American Heart Association) -- On a Monday in August, Steve Regier came home early from his office to prepare for a conference call later at home in Wichita, Kan. Needing a break from a day of meetings, he decided to squeeze in a run.

With the thermometer past 95 degrees, Steve normally would have logged miles on his treadmill. But a remodeling of the kitchen forced the major appliances into the room where he exercised.

Soon into his run, he began coughing. He'd been coughing for days, enough to take pills containing epinephrine to combat congestion.

The next thing he remembers is waking up in the hospital three days later.

What Steve later learned was that after a couple miles, he passed a home with someone working in the yard. That person, Cooper Phillips, gave him a neighborly wave, and Steve waved back.

A few seconds later, Amanda Carrillo, driving with her daughter in the car, had stopped at a nearby intersection to wait for traffic when they noticed a man lying in the middle of the street.

As Amanda jumped out of her car to help, Cooper noticed the commotion and raced over to also lend a hand. They found a man whose skin was turning purple, the only sound he made was raspy gurgles.

Steve had gone into cardiac arrest. Amanda called 911, and she and Cooper took turns administering Hands-Only CPR until EMS personnel arrived and took over.

"Everything worked out so unbelievably perfect," Steve said. "Cooper said he'd come home early and wanted to mow the lawn. Amanda said she'd been talking to someone and was running late. The ambulance was nearby, on its way to pick up a non-emergency patient. My bad luck was also my good luck."

Thanks to Steve having filled out the emergency medical information in the health app on his iPhone, medical personnel immediately located his emergency contact -- his wife, Marilyn, who happens to be a nurse in the neonatal intensive care unit of the same hospital Steve was taken to, Wesley Medical Center.

Marilyn was so shaken by the news that she had to have a friend walk her to the emergency room.

"Of course, I'd been there before, but I didn't think I'd be able to find it," she said. "I couldn't even use my phone."

The couple's son, then a senior in high school, and daughter, then in college, joined her later at the hospital.

Initially, Marilyn assumed Steve's heart problem was related to a six-way bypass he'd had 10 years earlier. But doctors determined the cardiac arrest was a freak occurrence caused by a combination of circumstances -- the epinephrine he'd taken, physical exertion in extreme heat and an undiagnosed case of fungal pneumonia from dust he'd inhaled during the kitchen remodeling.

When Steve arrived at the hospital, doctors put him into a medically induced coma and lowered his body temperature to help reduce the possibility -- or severity -- of brain damage. Three days later, they brought him out of it. For Marilyn, that was the scariest part -- how would he respond?

"When he came off the ventilator, he was obsessed with half a tooth he'd lost," she said.

Thankfully, most of the short-term memory loss faded within 24 hours.

Doctors discussed whether Steve needed an implantable cardioverter defibrillator, a device that can detect when the heartbeat is too fast or chaotic and gives electric shocks to stop the abnormal rhythm. While one cardiologist thought it may not be necessary, Marilyn insisted.

"Had he not had it put in, I couldn't have functioned," she said. "Having that has given us both a huge peace of mind."

Steve is back to jogging (albeit slower), which Marilyn is trying to accept.

Steve and Marilyn both sing the praises of Cooper and Amanda. They gave them each heart-shaped cookies after Steve was back home.

In 2018, less than a year after Steve's cardiac arrest, the foursome walked together as a team in the Wichita Heart Walk. Steve will be chairman of the 2019 event on June 8. He said it's a great platform to spread the word about the importance of knowing Hands-Only CPR.

"I understand that people get nervous about mouth-to-mouth CPR, and I want them to know that it's not necessary," he said. "Even with your hands, you can make a huge difference in somebody's life. When you start thinking about the ripple effect in someone's life -- their work, their friends, their family -- it's pretty staggering."

Copyright is owned or held by the American Heart Association, Inc., and all rights are reserved.

My son had one at 14. He is now 18 thanks to his fast acting teachers at school! He has a heart disease arvc. He now has pm/fib. Its went off several… read more

posted over 1 year ago

Another Plus to Cardiac Rehab: Better Sex

Measure Your Blood Pressure at Home?

Article written by Alison Channon The 2020 fall and winter holiday season will be different than...

Article written by Alison Channon The 2020 fall and winter holiday season will be different than...
read article >

During the COVID-19 pandemic, MyHeartDiseaseTeam will provide summaries and links to articles of...

During the COVID-19 pandemic, MyHeartDiseaseTeam will provide summaries and links to articles of...
read article >

Four Books About Heart Disease You Should Read

Thousands of members of MyHeartDiseaseTeam connect with one another and read each other's stories...

Four Books About Heart Disease You Should Read

Thousands of members of MyHeartDiseaseTeam connect with one another and read each other's stories...
read article >

Article written by Christine SprungerIt is vital to seek urgent care for new or worsening heart...

COVID-19 and Heart Disease: Are You At a Greater Risk?

Article written by Christine SprungerThe past several weeks have been unprecedented in our...

COVID-19 and Heart Disease: Are You At a Greater Risk?

Article written by Christine SprungerThe past several weeks have been unprecedented in our...
read article >

Canceling Is Kindness: Keeping Safe From COVID-19 With Heart Disease

Article written by Kelly Crumrin According to the Centers for Disease Control and Prevention...

Canceling Is Kindness: Keeping Safe From COVID-19 With Heart Disease

Article written by Kelly Crumrin According to the Centers for Disease Control and Prevention...
read article >

Two Ways to Get Started with MyHeartDiseaseTeam

Connect with others who are living with heart disease. Get members only access to emotional support, advice, treatment insights, and more.

Get the latest articles about heart disease sent to your inbox.

close
ABOUT HEART DISEASE TYPES DIAGNOSIS CAUSES SYMPTOMS TREATMENTS RESOURCES
New to MyHeartDiseaseTeam? Learn More
Quick Links
Q+A Treatments A-Z Resources Are you a provider? Crisis
About Us
What is MyHeartDiseaseTeam? Partner with us Terms of service Press/News Privacy policy Cookie policy
Help With This Site
Getting started FAQ Community guidelines Contact us

© 2021 MyHealthTeams. All rights reserved.
MyHeartDiseaseTeam is not a medical referral site and does not recommend or endorse any particular Provider or medical treatment.
No information on MyHeartDiseaseTeam should be construed as medical and/or health advice.